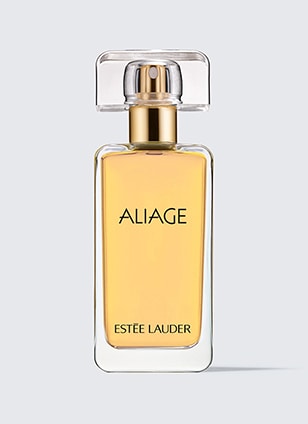 The Inspiration
Introduced in 1972, Aliage was an idea ahead of its time. Mrs. Estée Lauder created it as the very first "sports fragrance" because she felt that the active woman needed a scent all her own. She designed it for the contemporary woman who likes casual clothes, leads an active life and moves around the world as if it were her home.Aliage celebrates the new femininity which emerged in the early '70s. At that time, perfume advertising was about ballgowns and glamour, not bicycles and fishing boots. Women were surprised and thrilled by this fresh, cool fragrance and its exuberant, energetic feeling. It was a revolutionary concept at the time, and an idea that's still relevant today.
Ingredients
Ingredients: Alcohol Denat., Aliage Perfume (Parfum), Water\Aqua\Eau, Hexyl Cinnamal, Benzyl Salicylate, Limonene, Linalool, Hydroxycitronellal, Benzyl Benzoate, Benzyl Cinnamate, Coumarin, Eugenol, Evernia Prunastri (Oakmoss) Extract, Benzyl Alcohol, Citral, Geraniol, Evernia Furfuracea (Treemoss) Extract, Butylphenyl Methylpropional, Citronellol, Cinnamyl Alcohol, Cinnamal, Amyl Cinnamal, Isoeugenol <ILN38112>
Please be aware that ingredient lists may change or vary from time to time. Please refer to the ingredient list on the product package you receive for the most up to date list of ingredients.
Reviews
Top